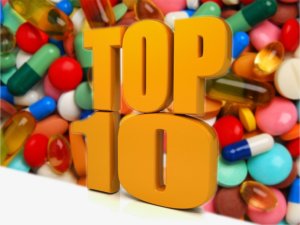 Here is a list of the top ten prescription drugs in the US in 2016. The results might surprise you.

10. Norvasc (amlodipine) – treats high blood pressure
Norvasc, a calcium channel blocker, widens blood vessels allowing for better blood flow. It is generally used to treat chest pain and high blood pressure. Having lower blood pressure lowers the risk of strokes and heart attacks. The drug is generally used alongside other lifestyle changes such as dietary improvements, exercise and losing weight. Norvasc can increase your ability to exercise and lower the amount of angina attacks, but it is not used to treat chest pain when it does occur. Other medications are used to relieve chest pain.

8. Lipitor (atorvastatin) – treats high cholesterol
Lipitor (atorvastatin) reduces cholesterol and triglycerides in the blood while increasing “good” cholesterol. Liptor is used to lower the risk of strokes, heart attacks and other heart complications in people with coronary heart disease, type 2 diabetes or other risk factors. The group of drugs Lipitor belongs in is called HMG CoA reductase inhibitors or statins.

7. Glucophage (metformin) – treats diabetes
Glucophage is used to regulate blood sugar levels in people with type 2 diabetes by decreasing glucose production in the liver. It also helps to restore the body’s proper response to insulin that is naturally produced. Glucophage is sometimes used in combination with insulin or other medications, but is not used to treat type 1 diabetes. It needs to be used in conjunction with a proper diet and exercise program. Controlling high blood sugar helps prevent kidney damage, blindness and nerve problems, while proper control of diabetes lessens the risk of heart attacks and strokes.

6. Neurontin (gabapentin) – treat seizures and nerve pain
Neurontin, an anticonvulsant, is an anti-epileptic medication that prevents and controls seizures. It also relieves nerve pain that is caused by herpes virus or shingles, or other nerve pain conditions and restless leg syndrome.

3. Delasone, Sterapred (prednisone) – treats arthritis
Delasone belongs to a class of drugs known as corticosteroids. The drug treats conditions such as arthritis, breathing problems and autoimmune diseases. It works by decreasing the immune system’s response to various diseases.

2. Synthroid, Levoxyl, Unithroid (levothyroxine) – treats hypothyroidism
Synthroid is used to treat hypothyroidism, which acts as a replacement for a hormone that is normally produced by the thyroid gland to regulate the body’s energy and metabolism. It can also be used to prevent an enlarged thyroid gland. Having enough thyroid hormone is important in maintaining normal mental and physical activity.

1. Vicodin, Norco, Xodol (hydrocodone/acetaminophen) – used to treat pain
Vicodin is used to treat pain and is a combination of acetaminophen and hydrocodone. Hydrocodone is an opioid pain medication and is sometimes referred to as a narcotic. Since this painkiller is an opioid it is often abused as a recreational drug, since they are addictive. Since 2014, all hydrocodone drugs require a written prescription which can be obtained from your doctor.

Shocking Results
There are so many reasons why you might need to take prescription drugs (and there are many different types of prescription drugs listed in this list of top 10 prescription drugs in  2016) but we found these results a little shocking. Having an opioid painkiller at first place is definitely shocking considering America’s fight against opioid abuse. The majority of drug overdose deaths in the US involve the use of an opioid. In fact, since 1999 the number of deaths resulting from overdosing with opioids quadrupled, and 78 Americans die every day from opioid overdose. The fact that Vicodin is at the top of the most popular prescription drugs in 2016 suggests that this highly addictive drug continues to be abused despite government efforts and initiatives.

The rest of the results aren’t all that comforting either. Upon taking a closer look at the results it would seem that as a population our health isn’t in particularly good shape. A lot of these prescription drugs are used to prevent heart failure, lower bad cholesterol, lower blood pressure, treat type 2 diabetes and treat anxiety. These medical conditions are so prevalent, they have become almost expected, especially in the aging community. Thanks for Big Pharma and medical research we have these amazing drugs easily in our reach, but it seems we have reached a point that prescription drugs are a necessity for surviving into old age. How many seniors do you know who do not require medicine for one of these top conditions? Not many. So the question is why?

Are we too busy and stressed for our own good? Are we eating right or are we so overburdened that our eating habits have taken a turn for the worse? Does work, finance, and family life balance take such priority now that we find ourselves putting personal health last on our list of priorities? Or has genetics changed? Or is it just more diagnosed and more easily treatable?

It’s crucial to get our bodies in good shape sooner rather than later, as the health risks only increase as we age. With so many of America’s most popular drugs being used to treat people who have poor cardiovascular health, it would suggest that we are not taking particularly good care of ourselves. There’s no time for wholesome food, daily exercise and rest and relaxation.

If we can regain control over our health, maybe the statistics for 2026 will look very different.