The crazy price of generics 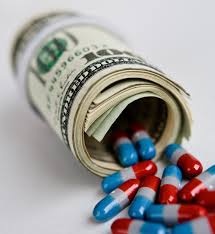 We used to buy generics because they were cheaper and they saved us money, we were even prepared to potentially take sub-standard medications in order to cut the crazy price of generics (generic prescription medications) but all that seems to be changing rapidly. The prices of generics are rising. Sometimes slowly and sometimes 100’s of $$ at a time. It’s changing the face of how we see prescription medication and painting Big Pharm companies in a not too credible light. The fact is, it used to be a given that the price of generics was cheaper than the branded medication. Now, it’s not necessarily the case.

There has been a lot of coverage in recent months about the cost of high end drugs like Sovaldi. This does account for some of the predicted 6.8% increase in drug costs in 2015 but it does not account for all of it.

According to a report by Truveris that looked at industry trends, the price of generics overall rose by 4.9% over the past few years. That does not sound terrible compared with the rise of branded medications and specialty meds the figure is highly misleading. Some drugs have not risen while other drugs have risen more than 1,000%.

It’s especially high in certain sectors. For example pain meds rose by 30% and heart meds rose by 23%. According to a report by Elsevier more than 22 drug groups even increased their prices by more than 100%, and that was only in the 2013/14. Sometimes price hikes like these can mean adding $100’s if not $1,000’s on to patient’s prescription costs. While the price of generics all over the world are rising, they are particularly bad in the US.

Generics don’t have the research costs. Generics do not have the same FDA approval costs. According to Forbes generic drugs should cost 80-85% less. They did, but they don’t anymore.

So, what has happened over the last few years to cause the price hikes?

Since 1984 when the Hatch-Waxman Act opened up the pharmaceutical industry to allow better competition from generics the use of generic drugs over branded drugs has risen to control 80% of the market and it used to have 100% of generic players. As more and more branded drugs come off patent more and more generic versions are entering the market. This was good news for US healthcare. Reimbursing for generic drugs costs less than reimbursing for branded drugs and it has led more than a trillion $$’s savings over the last decade. The price rises are not only putting patients under pressure, they are putting the entire healthcare system under pressure.

By 2008 there were too many generic drug manufacturers on the market, competition was too high and there was nowhere to go. Many manufacturers consolidated and by 2012 the US was left with only a handful of approved generic manufacturers. Less competition means less of a price war, which immediately influenced the prices to start rising.

At the same time FDA regulations started getting stricter on quality control. This causes two problems, the two main causes of price increases since 2012. If the FDA investigates a manufacturing plant or considers it has a quality control issue then the manufacturer has to stop production. This leads to drug shortages and it can take months for the facility to be re-approved. In the meantime the drug company has a choice to make, either they can sit tight and halt production, or they can move production to another plant and increase capacity there so the existing plant business does not suffer. Both options cost the drug company significant loses, loses that have to be made up somehow to ensure the survival of the company. The FDA’s obsession with quality control also forces manufacturers to upgrade their production machinery and systems. The extra cost to the company has to be made up somewhere, often it’s the general public who pay.

There’s another problem with the FDA and their strict approval system. It has caused an enormous backlog of approvals on new generic drugs. While the backlog continues, these generic companies are losing money so when the drug is finally approved this money will need to be re-cooped. It also leaves the market less competitive on specific drugs so current brand and generic manufacturers can charge what they like.

Supply and demand force the price of generics up. It’s simple business (even if the Pharma companies are taking advantage of us and raising the prices astronomically)….

Is the FDA in the US to blame for all the trouble? It seems like it and it’s causing more and more people to buy medication online from abroad. Same medication, half the price. In countries like Israel (where IsraelPharm.com are based) the Israeli Ministry of Health is at the top of its game and ensures prices remain as low as possible. Typically drugs in Israel can cost the patient as much as 70% less than in the US. It would be nice to see the US stepping up and taking more of an active role in keeping price of generics and branded medications down.

While driving prices higher the FDA is also doing significant damage when it comes to the more shady aspects of prescription drug and abuse. It’s encouraging the illegal prescription drug trade that uses below standard production and unknowing Americans are getting caught up in it simply because they are desperate to get hold of cheaper drugs.

For many, it is reassuring that the FDA is so strict, however they do seem to be causing unnecessary problems in the Pharma industry, especially when it comes to the price of generics. Either they have to relax their regulations or the government needs to invest in more manpower to get the job done.