Canada might congratulate themselves on fair and low-cost drug prices but Israel goes further to help their citizens. Check out what happens when you compare Canada vs Israel drug prices. If you think Canada is cheaper than USA then you’ll be shocked at just how much cheaper you can obtain your prescription medications in Israel.

US senator Bernie Sanders has been making waves on Facebook and across the news with his comparisons. This was in the run-up to the elections but he has been talking about this issue for a very long time and continues to do so.

Here is a link to his Facebook post comparing the cost of 10 popular prescription drugs in USA to prices in Canada….. and there’s quite a drug difference!

What no-one in the senate will come forward with though is how much these drugs cost in other places around the world. For example, Israel. Israel has one of the most comparative, price capped and subsidized prescription medication baskets in the world. 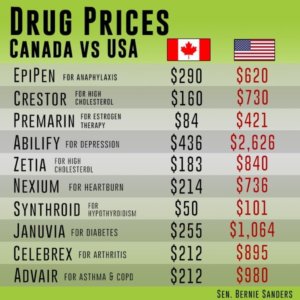 The list below shows the prices for the same drugs on IsraelPharm.com, and Israeli online pharmacy, based on the Israel Ministry of Health basket and their price capping*.

On 21st October on his Facebook page he stated:

“The soaring cost of medicine is a major health crisis nationwide. One out of five Americans age 19 to 64 cannot afford their prescriptions. Hundreds of thousands of seniors cut their pills in half to stretch one month’s prescription into two. Many of those patients will get sicker and some will die. Meanwhile, the five largest drug companies made more than $50 billion in profits last year. The top 10 CEOs in the industry received a total of more than $327 million in compensation.”

In reality, we don’t see much changing in the US with regards to prescription medication costs, at least not in the short term. In places like Canada, Israel and Europe there are publicly funded or a universal healthcare system that reduces costs of citizens and allows them to purchase affordable medication.

Having a universal single payer health care system is the best option right? No more Obamacare that was meant to make things better (but for many made it worse), no more privately funded insurance money grabbing companies. Healthcare in the US should not be influenced by Big Pharma money and private insurance companies who are only out for their own benefit. A universal state-run, socialised medical program is the best chance of seeing drug prices lower over time and become once again affordable.

And let’s remember, now President Trump has won the election there are going to be even bigger changes – and not in a way that will lower prescription medicine costs! Trump has mentioned many times how he wants to abolish Obamacare completely, making it even harder for Americans to afford medication. You just need to look at what’s happening with many American women since the election results. Women are heading out to their gynaecologists asking about getting IUDs inserted in case they can no longer afford to buy birth control pills. If drug prices get even higher than they are now it could be you who can no longer afford their meds.

You want to see a specialist about a bent finger? A second opinion because you’re not happy with a prior consult or some oil bumps on your scalp removed as they are unsightly – OK go ahead; it’s your choice. Medication for many is not a choice, it’s a necessity. Most of the time it’s an absolute necessity – so why should you have to choose between food, electricity, mortgage or meds? Controlling drug prices needs to be made a priority for the health of the nation. Will it happen? Who knows…
Saved by online pharma
Changing the entire healthcare system again will be highly unsettling, highly confusing and, let’s face it, probably isn’t going to happen.

Luckily, Americans are very resourceful and online pharma is booming. If you need cheaper drugs you can find them all over the world. We’re not talking fake, third world drugs – we’re talking the exact same branded drugs. Importing prescription drugs for personal use can provide you with the meds you need at a price that’s acceptable. The “big boys” of FDA, insurance and Pharma might not like it but if they walked a day in our shoes, you can be sure they would do the exact same thing.

Take the money out of politics and take the astronomical profits out of pharma and we might be able to make some headway into affordable medication.

In the meantime, check out drug prices in Israel as well as Canada and Europe the next time you head to your computer to buy prescription drugs online. Israel might be further away than Canada but the prices of drugs are even cheaper and excellent postal services mean that your parcel arrives within 10 days to your door.

A little bit of forward THINKING AND PLANNING AHEAD CAN SAVE YOU A LOT OF MONEY.

**drug prices listed above vary depending on the strength needed. The prices may vary for higher strengths. This is the most recent comparison with US prices taken from GoodRX.