Running for Your Heart

Exercise is an essential part in keeping healthy and maintaining heart health, but does running specifically benefit our heart as much as we previously thought?

A new study was released a few months ago which investigated whether or not years of endurance and training actually did lead to healthier hearts.

Not so many years ago, running was thought to be one of the best protectors against heart disease. But since then, many scientists have been concerned about the effects that long-term, strenuous exercise has on the heart, particularly when there have been cases of runners dying of heart attacks.

One study showed that middle-aged triathletes who trained the most often had slightly more scarring inside their hearts than other athletes. Other studies have shown that marathon runners are at greater risk of developing plaques inside their coronary arteries. These studies have been small but newer studies have also shown that men who ran more than four hours per week were more likely to have plaques in their arteries than those who ran for less.

It is important to note is that the studies have shown that the plaques were dense in those that exercised whereas people who lead more inactive lifestyles were found to have had plaques which are more problematic and fattier. Additionally, while there is correlation between exercise and plaques, there is no measurable proof  that athletes are at any greater risk of developing a heart attack than less active people. So while prolonged exercise might alter your arteries, it doesn’t mean that it is actually harming your arteries. Of course, further studies need to be done.

Indisputably – a lifetime of heavy smoking and high cholesterol leads to greater levels of plaque in the heart and arteries. Exercise cannot completely reverse the damage caused by heavy smoking and poor eating habits. Fortunately, those who have heart problems can be treated by prescription medication. Ocsaar is used to treat high blood pressure and Plavix helps reduce the risk of heart disease and stroke for those who are at high risk. So if you are concerned about cardiac disease due to family history or an unhealthy lifestyle, or if you’re concerned about exercise, it is advisable to consult with your doctor who can find the best medication to reduce your risk of heart problems. 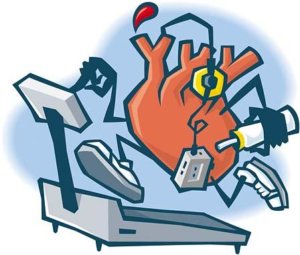 While this all might seem discouraging, there is some good news. There is no identifiable proof that long term running is detrimental to heart health.  Many runners likely benefited from clearer arteries due their running activities. One study has showed that female marathon runners had almost no plaque in their hearts.

Additionally, there is more of a correlation between plaque found in arteries in athletes or marathon runners. Those running a modest amount per week may gain the most benefits, though the data is mixed and the evidence is still very much in dispute.

The bottom line is that running is not deemed harmful to our heart and does not necessarily increase your risk of heart disease. Yet,it might not be as beneficial as was once thought and it’s certainly not a complete solution to achieving good health especially when the body has been previously damaged by smoking or if there is a family history of cardiac disease.