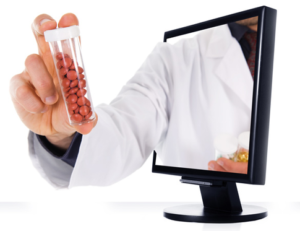 We have a new customer service representative called Linda and she has some insights to share with you all! First up, Linda is a pharmacist. She was born in Pittsburgh, she attended Temple U. School of Pharmacy and did graduate work at NovaSoutheastern. Linda have been a practicing pharmacist for 38 years and in the past has managed pharmacies for Target, Walmart, Eckerds Corp. and Thrift Drug Co.

Linda loves helping people which is why she spent so many years working in retail pharmacy but she also has experience in managing pharmacies, training pharmacists and technicians, and recruiting. The IsraelPharm.com team is made up of “olim” (people who move to Israel) from all over the world including the UK, US and Australia. Our newest member of staff made aliyah from West Palm Beach Florida in 2002 and we’re thrilled to have her work with us.

“I come from a family of pharmacists. My uncle used to bring all of his fraternity brothers home and my grandma would ask them questions to prepare for tests at the kitchen table and I couldn’t wait until I grew up and it was my turn. Fast forward 40 years. I found myself thinking about why people became pharmacists and who they were. For me, I love taking care of people. Then I thought about of the people who used pharmacy as a springboard to other careers and did a little research on the web. What I found out surprised me and I want to share some of it with you. There really is a Who’s Who in pharmacy. Five of the major soft drinks we drink were discovered by pharmacists. John Pemberton, a civil war soldier was searching for a drink that would relieve some of the pain from his war injuries. Originally called French Wine Cola, he developed a soft drink containing cocaine which later became you guessed it, Coca Cola. Charles Adderton, a West Virginia pharmacist, used mountain herbs, roots and seltzer to create the popular soft drink, Doctor Pepper.

Hires root beer is named for Charles Elmer Hires, another pharmacist and the same for Pepsi, created by Caleb Bradham. And last but not least, Vernor’s ginger ale was a product created by Detroit pharmacist James Vernor. Next time you are thirsty and pick up your favorite pop or soda, think about the pharmacist who made that drink possible. Benjamin Franklin established the first public hospital and apothecary in Philadelphia called The Philadelphia Hospital and he actually dispensed medications from the apothecary. Well known author, Agatha Christie, was a hospital pharmacist who became intrigued with poisons during her professional career and several of her mysteries featured thallium poisoning as part of the plot.

Herbert Humphrey, the 38th VP of the US was a pharmacist and worked in his father’s store. His first bill as a senator was for a health insurance program which later emerged as Medicare. Benjamin Green, used red veterinary petroleum for sunburn protection for himself and fellow soldiers during WWII. He came home to Florida to his pharmacy practice and developed COPPERTONE. Sir Isaac Newton started his career as an apprentice in an apothecary in Grantham, England and Benedict Arnold, who fought in the civil war before switching to the British side also switched careers and opened up an apothecary in Connecticut after the war.

However, for me, the most famous pharmacist is the pharmacist on the counter every day filling prescriptions safely and efficiently or the pharmacist at the other end of the phone line helping patients to reach better health care vistas..”

Linda has quite a sense of humor too. Here are some funny Pharmacist encounters that she has experienced while working as a retail pharmacist in the US.

And one of our favorites….

In all seriousness, sometimes customers don’t understand their scripts and sometimes over the counter medicines and hygiene products are just as confusing. That is exactly why we are here. Never be embarrassed to ask your pharmacist a question, believe me, we have seen and heard it all over the years. We might be answering you over the phone or by email instead of face to face but we take the time to care about your needs….. and once in a while we get asked serious questions too. Here are the top 10 most common questions we get asked – Top 10 online pharmacy questions.

And a joke to finish off with…. Because sometimes having a silly joke is the key to putting a smile on your face for the rest of the day.

An elderly lady goes asks the pharmacist for birth control pills. He responds, ” Mrs. Jones, you are 75 yrs, old. Why do you want them?” She says,” they help me sleep better.” The pharmacist responds “That is not possible.” She says, ” I put it in my 16 yr old granddaughters orange juice and I am sleeping like a log,now.”

Here are some more funny pharmacist jokes from our blog. Enjoy!