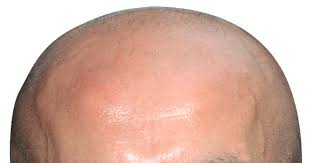 It has long been debated whether or not bald men have a bit more, shall we say, “virility” than their hairier counterparts.  There are many reasons for this discourse, but the most touted goes all the way back to the time of Hippocrates (see: the Hippocratic oath sworn by all doctors upon graduating medical school) where it was clearly observed that eunuchs, or castrated men, don’t lose their hair.

This well-known observation became a repeatable experiment in the 1940’s in the US when lauded anthropologist James Hamilton used prison inmates (convicted sex offenders who had been castrated as a result of their crimes) as his test subjects.  By observing their hair growth patterns, he was able to discern that castration ceased the balding process altogether thereby stopping hair loss.  That is, if an inmate had a full head of hair when he was castrated, he would never lose his hair.  If he was partially balding, he would retain what hair he had left, but lost hair would not regrow.

Between the 1940’s and now, science has determined that the male sex hormone, testosterone is the underlying fundamental trigger of baldness or lack thereof in men.  Being the primary androgen hormone, testosterone is responsible for all human traits that we associate with masculinity, such as virility, aggression and libido.  Testosterone also plays a key role in male pattern baldness by way of its binding to the hair follicles.  Because of this connection, many believe that virility and baldness must logically go hand in hand.

To test their theory, authors of a study that tied baldness to virility lined up roughly 3000 test subjects to see how their hair patterns related to their virility.  All of the men had in-person interviews and were placed into a specific category reflecting their level of baldness.  There were four different categories altogether, each representing a different level or pattern of hair loss.

After the fact-to-face interview, participants were asked to privately fill out a questionnaire relating to the frequency of their ejaculations between the ages of 20 and 49 (no matter how those ejaculations were achieved) as well as how many sexual partners they’d had over the course of their lives.

In the end, researchers were left without the answers they’d long sought and hoped for with regard to a demonstrable connection between baldness and virility.  Indeed, rather than prove that baldness amps up virility and increases sexual prowess, quite the opposite was found to be true, and here’s how.

Ultimately, no direct correlation between frequency of ejaculation and advancement of baldness was demonstrated.  Indeed, it was determined only that bald men were much more likely to have had less than 4 sexual partners over the course of their lives.

So, why the contradiction?  Remember, it had been demonstrated repeatedly over the course of hundreds of years that castration stops baldness in its tracks.

The research didn’t go to waste, however. Currently, studies are being conducted across the globe to find the magic combination of ingredients to inhibit baldness and help men regrow hair.

PrevPreviousGERD and vitamin B12 deficiency.
NextWhat is Obamacare ?Next