Ofev (generic name: nintedanib) is a highly specialized drug that was designed to treat the condition known as idiopathic pulmonary fibrosis (IPF) in adults. The medicine is intended to slow the rate of decline in pulmonary function in patients with systemic sclerosis associated with interstitial lung disease. In some instances the diagnosis may be called lung fibrosis; both terms describe the same condition.

What is Idiopathic Pulmonary Fibrosis (IPF)?

IPF is the term used to describe a condition in which the lungs become scarred and breathing becomes increasingly difficult. The term idiopathic indicates that it is not clear what causes the scarring. It usually begins to affect people from around the age of 70 to 75, and is rare in people under the age of 50.

IPF is a member of a large group of diseases known as Interstitial Lung Diseases (ILDs). There are more than 200 different types of ILD, which all share the characteristic of damage to the tissue known as the interstitium which is found between the alveoli (the air sacs of the lung).

IPF is the most widely studied and most common form of ILD, accounting for around 20%-30% of all cases. It’s characteristics are progressive fibrosis, and lung scarring. It is usually diagnosed by means of a common radiological pattern known as UIP (usual interstitial pneumonia).

IPF is believed to be a progressive condition since lung scarring that occurs in pulmonary fibrosis can’t be reversed. There is no current treatment that has proved effective in stopping progression of the disease.

How Common is IPF?

According to the American Lung Association, IPF is becoming more common than was once thought, with as many as 132,000 people affected in the United States alone. About 50,000 new cases are diagnosed each year.

Ofev belongs to the group of drugs known as tyrosine kinase inhibitors (TKI). These drugs work by blocking tyrosine kinase enzymes that are required to send growth signals in cells.

Initially, nintedanib was developed as an anti-tumor agent for treatment of small-cell cancers, since it slows cell growth and division. However, it was later noted to have activity against fibroblasts through inhibition of fibroblast growth factor (FGF). Extensive studies including two phase III trials in patients with IPF showed that nintedanib can have positive results.

In the case of patients with IPF, the targeted effect is to reduce the rate of progression of the disease by preventing the spread of fibrosis.

How Does Ofev Work in Cases of IPF?

Treatment with Ofev can slow the disease’s progression and may help improve quality of life. Although the pathogenic pathways resulting in IPF have not yet been fully elucidated, it is believed to be caused by a repeating cycle of alveolar epithelial cell injury and repair, in which there is uncontrolled proliferation of fibroblasts and differentiation of fibroblasts into myofibroblasts, which excessively deposit extracellular matrix (ECM) proteins in the interstitium. Fibroblast growth factor (FGF) is believed to play important roles in the genesis of IPF.

Nintedanib is a potent inhibitor of the FGF receptor tyrosine kinases. Nintedanib has shown consistent anti-fibrotic and anti-inflammatory activity contributing to its clinical efficacy in patients with IPF  in phase III clinical trials. 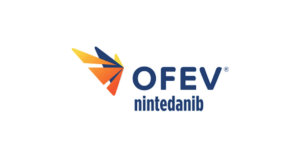 Click here to order Ofev or read more about the drug.