How Do I Get Imitrex?

Imitrex and its sister product Imigran (generic name: sumatriptan) are medications prescribed to treat migraine and cluster headaches. There are various ways to take it: by mouth in tablets or capsules, in the nose with a nasal spray, or by subcutaneous injection under the skin. 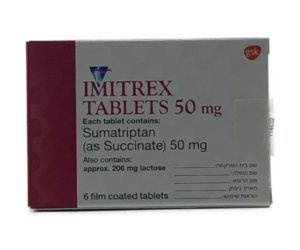 What Conditions is Imitrex Prescribed For?

Imitrex is prescribed for adults diagnosed with migraines, with or without aura, and also for the treatment of cluster headaches. It is not regularly used for children under the age of 18, nor for geriatric patients.

Imitrex is not a preventative medication but is only used to alleviate the symptoms of migraines or cluster headaches.

How Does Imitrex Work?

Imitrex is a treatment for symptoms of migraine. Its main component, sumatriptan, is known as a serotonin 5-HT receptor agonist, belonging to a class of drugs known as triptans. It works mainly by causing narrowing of blood vessels as well as affecting specific nerves in the brain. Imitrex doesn’t prevent future migraines or lessen the frequency of migraine attacks.

The exact mechanism by which it works is not fully understood. Still, it is known to be effective for ending or relieving the intensity of migraine and cluster headaches.

It is most effective when taken early after the start of the pain. Injected Imitrex is more effective than the other oral or nasal forms.

What are the Side Effects of Imitrex?

Common side effects may include some of the following feelings, which should be reported to the prescribing physician:

Serious side effects that can be life-threatening include:

Call 911 or go to the emergency room if you have any of these symptoms.

Note: overdose of sumatriptan can cause sulfhemoglobinemia, a condition in which the blood color changes to green. If sumatriptan is discontinued immediately, the condition reverses within a few weeks.

Is Imitrex Available Over the Counter?

No. Imitrex is available by prescription only from IsraelPharm in the following forms:

What is the difference between a migraine and a headache?

Both the experience and the causes of migraines differ from those of headaches.

Usually, they are differentiated in consultation with a medical practitioner, who will review a range of specific events, such as:

Migraine episodes likely arise inside the brain, mainly coming from a neurochemical imbalance or blood vessel dilation. The triggers can vary from person to person. Usually, factors such as hormonal changes, such as those related to menstruation, triggers such as anxiety, stress, depression, or excitement that have emotional effects are at the root. Consumption of alcohol and caffeine can also affect brain chemistry directly. Some people react strongly to ordinary foods such as chocolate, cheese, nuts, citrus fruits, and additives like MSG.

Dietary factors also contribute, including alcohol, caffeine, chocolate, nuts, cheese, citrus fruits, and foods containing additives like MSG. Some medications are contraindicated for people with a history of migraines. These include certain sleeping and birth control pills, as well as hormone replacement therapy.

Some other visual factors can act as triggers, such as bright lights, flickering TV or computer screens. Strong odors and smoke, humidity and stuffy rooms can all set off a migraine, as can physical conditions like tiredness due to a lack of sleep, incorrect posture leading to shoulder and neck tension, overexertion, jet lag and blood sugar problems.

Genetics plays a role since a family history of migraines is a known risk factor.

What are the characteristics of Migraine Aura?

Migraine with aura is a particular type of migraine headache. However, auras can occur without the physical pain of a headache.

Migraine auras are sensory symptoms that can occur before or during a headache. They may take the form of physical and visual disturbances and sensations.

Symptoms of migraine tend to occur in stages: