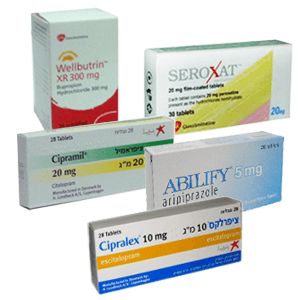 Suffering from depression and anxiety can take its toll on your body. Only fellow sufferers can truly understand the consequences. It’s sometimes hard to diagnose if the anxiety stems from depression or depression stems from anxiety. Your depression may be caused by environmental issues like working long hours in a stressful job you hate or it can be part of a more recognized mental health illness.

Doctor’s often prescribe SSRI medications to ease depression but it can take time to find out what medication works best for you. Some people react badly to antidepressants and some find them ineffective. All drugs can have adverse effects on your body, interact with other medications being taken or should even not be taken if you have a medical history of a different illness or disease. Side effects and indications listed on the drugs pharmaceutical leaflets can give you a strong indication on suitability to your personal situation so help yourself and do some research before you start taking new medications!

Here are the top 5 antidepressants that we sell on IsraelPharm. They rank as the most highly prescribed treatments for depression and anxiety disorders in the USA. We take you through the main uses and side effects so you can make an informed decision when consulting with your doctor.

Paxil is an SSRI. This means it is a type of antidepressant that has a selective serotonin reuptake inhibitor.  It can be used for depression as well as OCD (obsessive compulsive disorder), PTS (post-traumatic stress disorder), social phobia and general anxiety. The active ingredient is Paroxetine and it works by helping to stop released serotonin from being absorbed back into the brain. By doing this, the effect of the released serotonin is prolonged and in turn it helps relieve depression, anxiety and fear. You should be 18 years or older before using this medication.

Lexapro is also an SSRI and contains the active ingredient Escitalopram. As explained before SSRI drugs help to regulate the release and reabsorption of serotonin, an impulse chemical in the brain. Seretonin is the brain chemical responsible for depression, anxiety and mood swings.  It’s normally prescribed to help conditions such as general depression, panic disorder, GAD (general anxiety disorder), SAD (social anxiety disorder) and OCD (obsessive compulsive disorder)

This drug is a popular choice as it is tolerated by most people. Lexapro side effects include nausea, dizziness, insomnia and dry mouth. It can take 2 weeks for the drug to start having an effect and during this time some patients experience a worsening of symptoms. For Lexapro drug interactions and more information click here.

Celexa is an older version of Lexapro that is less commonly prescribed now, although it is still a good SSRI option for major depression. It helps relieve depression, fear and panic in the same way that Lexapro does, although the main active ingredient is called Citalopram. It’s another kind of medication that works to stop released serotonin from being reabsorbed into the brains nervous system. For Celexa drug interactions and side effects click here.

Abilify is generally used to treat conditions like Schizophrenia and Bipolar disorder. It contains the active ingredient Aripiprazole. This antipsychotic medication works by altering the brains sensitivity to serotonin and dopamine, 2 chemicals found in the brain that control impulse. It can be used as a monotherapy or combination therapy. The maximum daily dose should not exceed 30mg. It can take up to several weeks before you feel the effects. Older people who suffer from dementia should not use this drug.

Wellbutrin (also known as Zyban) is used as an atypical antidepressant. The active ingredient is a compound called Buproprion and it works by reducing cravings and controlling withdrawal effects. For this reason it can also be used to help quit smoking.

One thing all these medications have in common is that you should never suddenly stop taking them. Any discontinuation of treatment should be approached gradually so your body adjusts more easily. Never start or stop taking antidepressants without the go ahead from your Doctor, the same goes for changing doses. It can be dangerous and set you back in your recovery.