What is Eliquis? Why Take It?

Eliquis (generic name apixaban) is commonly used as an anticoagulant for the treatment of: 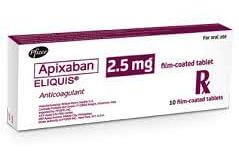 Eliquis (containing apixaban) is prescribed as a blood thinner (anticoagulant) to block specific clotting proteins in the blood for patients who suffer from atrial fibrillation, or deep vein thrombosis following hip or knee surgery.

In a 2018 study of the effectiveness of the classes of drugs being used in treating Atrial Fibrillation cases, Eliquis was declared to be the safest for stroke prevention.

In the United States, Eliquis is also approved to treat deep vein thrombosis and pulmonary embolism and as a longer-term medication to prevent them from reforming.

What are some of the conditions where blood thinners are needed?

There are many conditions resulting in blood clotting that can potentially lead to serious outcomes. In general, the dangers that blood clots can lead to range from risk of stroke resulting in partial paralysis, all the way through to systemic embolism that can be fatal. The usual therapy to prevent clotting is taking anticoagulants, which act as blood thinners that reduce the chance of blood clotting. Eliquis is one of the most frequently prescribed anticoagulants.

Primer – what causes blood to clot?

Clotting, properly called coagulation, is an essential and natural function of the blood. For example when you scratch your knee and it starts to bleed, usually as soon as it comes into contact with the air, it will start to coagulate and the flow of blood will slow and stop, finally forming a scab so that the injury can heal underneath.

If you want to know more about this subject, there’s a great explanation on the bleedingdisorders.com website.

However, coagulation inside the vessels carrying blood around the body can prove to be highly dangerous. Blood clots can grow in size until they form a large body, known as a thrombosis. This can cause blockages to the flow of blood through arteries and veins, resulting in damage to the tissues further down the network due to oxygen deprivation and resulting in cell death.

The usual cause of AF is where one or more heart muscles are not beating as they should. Atrial fibrillation is the most common serious abnormal heart rhythm. It was reported last year that it affects more than 33 million people worldwide.

Atrial fibrillation may occur in otherwise normal hearts, but much more often is linked to cardiovascular disease, including high blood pressure, coronary artery disease, rheumatic heart disease or mitral valve prolapse and left atrial enlargement. Some congenital heart diseases also manifest as atrial fibrillation, and people with a family history of the condition among first-degree relatives run a 40% increase in the risk of AF.

Several other general health changes can cause AF, mainly heart surgery or a heart attack.

How does Atrial Fibrillation cause clotting?

Often, changes are seen in blood vessel walls, in flow volume and in blood constituents that in combination contribute to thrombus formation (technically known as thrombogenesis) in atrial fibrillation. These abnormal changes may take place in one or more of the promoters of clotting, that seem to be unrelated to the cause of atrial fibrillation.

What are the common treatments for Atrial Fibrillation?

Many of the causes of AF are related to lifestyle and general health. These include obesity, high blood cholesterol, smoking, and alcohol consumption. Doctors recommend addressing these issues along with any other treatments.

Modification of the heart’s rhythm

Initially, most treatments try to restore a normal heart rhythm with a single electrical or chemical “jolt” (known as cardioversion) and maintain the rhythm with drugs.

Electrical cardioversion delivers an electrical shock to the heart, which briefly stops the heart’s electrical activity for a few seconds. The object is for it to resume with normal rhythm.

The danger coming from AF is of a thrombosis leading to a blockage that may cause a stroke or heart attack. Anticoagulants are usually recommended in most people other than those at high risk of bleeding.

The general classification of this type of drug is a direct oral anticoagulant (DOAC). You can read more about these further down.

Deep vein thrombosis (DVT) is a serious condition in which a blood clot that developed in a vein can break away and cause a number of potentially fatal results. The clot could travel to the lungs and cause a pulmonary embolism.

The blood clots related to DVT most frequently develop in the legs and may cause the post-thrombotic syndrome, which manifests as swelling and pain. If untreated, it can result in permanent damage to the legs.

Because DVT most frequently develops in the lower part of the body, patients who have had hip or knee replacement surgery are at greater risk of serious side effects from DVT. Research has shown that the risk period for clots in the deep veins can be up to 12 weeks after hip replacement and up to six weeks after knee surgery.

Post-surgery, patients are usually advised to take some steps to minimize the chance of DVT developing, including:

For many years, the anticoagulants most frequently prescribed for patients were aspirin or warfarin. Currently, there have been numerous studies that show that the DOAC class of drugs such as rivaroxaban, edoxaban, and apixaban offer significant benefits. The speed of the desired onset of anticoagulation makes DOACs at least as effective as warfarin for preventing strokes and blood clots, if not more so. DOACs carry a lower risk of bleeding in the brain compared to warfarin.

Tell me more about Eliquis

Eliquis’ main therapeutic ingredient is the DOAC apixaban, which works as an anticoagulant to block specific clotting proteins in the blood.

According to a published report, in a 2018 follow-up of the effectiveness of DOAC drugs in treating AF cases, Eliquis was declared to be the safest effective DOAC for stroke prevention in AF, as per the Agency for Healthcare Research and Quality’s (AHRQ) report.

In the United States, Eliquis is also approved to treat deep vein thrombosis and pulmonary embolism and as a longer-term medication to prevent them from reforming.

What are common side effects and contraindications of direct oral anticoagulants like Eliquis?

Among the more common mild side effects are nausea, easy bruising, or minor spontaneous bleeding such as a nosebleed or bleeding from scrapes and cuts that don’t stop quickly.

Although severe side effects are extremely rare, be sure to tell your healthcare provider or pharmacist if you experience any feelings of discomfort, or, most importantly, severe spontaneous bleeding.

Be sure to tell your doctor or pharmacist immediately if you have any of the following symptoms:

Your doctor will have given proper consideration to how the active ingredients in Eliquis interact with your other medications and could affect your health. In all cases, the doctor will consider that any adverse effects will be far outweighed by the life-giving benefits that Eliqis brings to patients with your condition. If you are in any doubt, discuss this with your doctor and pharmacist.

What is the recommended dosage of Eliquis?

Your doctor will prescribe the dosage that is appropriate to your condition, as well as factors such as age, body weight and more.

Take the medication according to the instructions you receive from your dispensing pharmacist, and the enclosed pamphlet you receive.

Important: Do not take Eliquis with any form of alcohol.

For more about Eliquis, visit the IsraelPharm drug page.

Cozaar (generic name: losartan) is commonly prescribed to treat high blood pressure (hypertension). In the US, the name Cozaar describes

Flomax (generic name: tamsulosin) is prescribed to treat the symptoms of Lower Urinary Tract Symptoms (LUTS) due to benign prostatic

Ofev (generic name: nintedanib) is a highly specialized drug that was designed to treat the condition known as idiopathic pulmonary