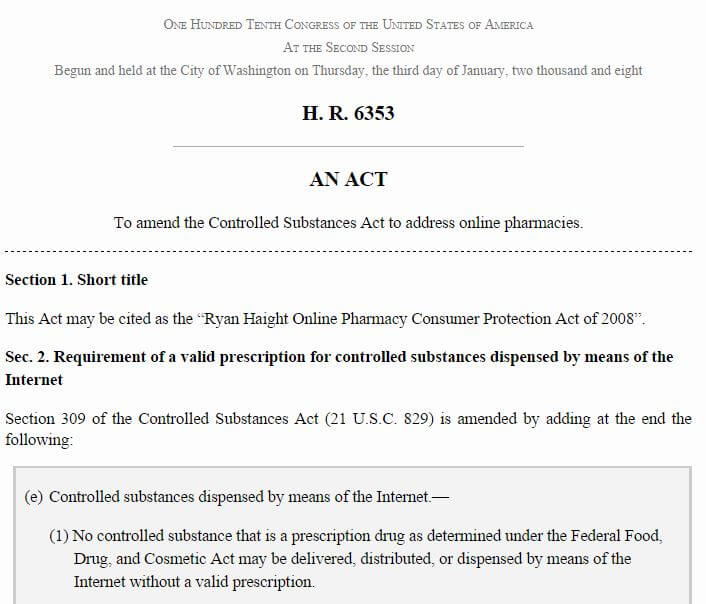 Most people who order prescription medication online have weighed up the legality of buying medication online from abroad: there is a blurred line between legal and illegal. The sticking points seem to revolve around the production of a prescription and if the shipment is below a three month supply. In a way, the different laws surrounding this area of commerce are outdated and contradicting, which is where the main confusion comes in.

This recent blog post on Personal Importation covers some of the main issues and confusions that Americans face when deciphering the law and buying medication online, from a US online pharmacy or from abroad.

2014 brought attention to this confusion due to an increase in publicity. Press coverage has ranged from stories of insurance companies dropping drugs and forcing people online to the indictment of couriers like FEDEX. The FDA used to say that they feel it is technically illegal to buy online and ship into the USA. However, they also used to say that if the shipment is below a 3 month supply and it was dispensed with a valid prescription then they allow it or at least “turn a blind eye”. At the end of the day it’s a small industry within their reach and is therefore of limited insignificance (reading between the lines, they have “bigger fish to fry”).

Having said this, the FDA has recently started to crack down and the DEA has indicted FEDEX for allowing through personal importations of prescription medications purchased without prescriptions. The reason why FEDEX are in trouble is not because prescription parcels pass through their hands. It is because they knowingly let through drugs from 2 specific companies who do not insist on prescriptions for serious controlled drugs.

The laws surrounding online purchase of controlled drugs are quite defined, which is why we are confused about the current crack down. Amendments were made to the law back in  2008 so online pharmacies were taken into consideration.

The Ryan Haight Online Pharmacy Consumer Protection Act of 2008 was a groundbreaking Act passed and signed off in October 2008.

The death of a teenager called Ryan Haight spearheaded the Bill back in 2001. He overdosed on a prescription opiate drug that he purchased from a US online pharmacy, without a valid prescription. Prior to this Bill, there were no provisions made in the law for the purchase of controlled substances or prescription medication online. Buying over the internet was a new business and it was still a relatively small sector. The bill’s aim was to amend the “Controlled Substances Act” so it included guidance about buying from online pharmacies.

“Controlled substance” is an umbrella term used to describe hazardous prescription medication and illegal drugs that are controlled and regulated by Federal law under a classed system. A drug is accredited to a specific class based on what it is used for, how strong it is, how addictive it is and what side effects can be caused by it.

Saul at IsraelPharm.com online pharmacy agrees that these were much need amendments, not only to introduce online purchasing into the law but also to deter unauthorized dealers from selling drugs online.

“Providing a valid prescription is imperative for any pharmacy when considering dispensing prescription medication. Any ethical pharmacist would agree and anyone buying online should be wary of internet pharmacies that do not adhere to this.”

Controlled substance abuse (prescription medication and illegal drugs) remains a growing problem in the US and authorities on all sides are trying to stem the flow of abuse. At the same time many states are doing their best to take care of their citizens and legally allow them access to otherwise unaffordable medication by introducing new laws that clearly state it is OK to buy online provided you have a valid prescription. The Personal Drug Importation Fairness Act of 2013 has done a lot to spearhead changes in the law and many states have already passed laws confirming that valid prescription based personal importations are officially legal, no questions asked.

PrevPreviousAsthma symptoms and medications
NextNew Diabetes Meds On The HorizonNext