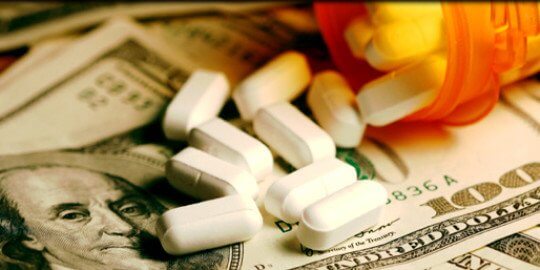 Drug prices in the USA are still rising. Why? Why is the US the only country that can’t control their drug prices? There are many theories out there….. here is what we have to say and it’s largely about drug company profits.

Before we get started there is a simple truth out there and it applies all over the world not just the USA. Drug prices are rising because the drug companies are raising them. It’s a knock-on effect.

The reason drug makers are justifying their high and rising drug prices? The profit they make is used to invest in the research and trial of new drugs. They say that if you want new drugs, better innovation, more solutions for illnesses then someone needs to pay for the research.

Here’s a link to an interesting video produced by Bloomberg about drug company profits and where drug companies use their money.

$50 billion was spent on drug research in 2015. It’s risky and takes years for this research to be completed and approved by the FDA before drugs can be mass produced and sold. The truth is, most drug research and development fails and we never see the drugs out there for sale. This doesn’t mean the research isn’t being done. For every successful drug application there are failures too, that’s life.

We understand the drug company profits are re-invested within the drug company to research and develop new drugs. We also understand that they are a business and need to make profit to keep their companies going and make a successful business. However, the US is one of the only countries in the world who do not regulate drug prices. This means that the drug companies are free to make as much profit as they see fit.

This comes at a time when US insurance companies seem to be covering less drugs and capping the amount of subsides available.

This is what is sending 4 million Americans online to import drugs from abroad. Many prescription medications, used daily in many households, are simply no longer affordable. Instead of not filling the prescription, Americans are going “grey” and buying from abroad for personal importation.

We all love online shopping but you do think twice about buying prescription drugs online. There’s really only one reason to do it and that’s money. IsraelPharm online pharmacy is based in Israel where the Ministry of Health do regulate and cap drug prices. On average you can save 70% on prescription medication when you buy online from an online pharmacy like IsraelPharm.com. You can literally save $1,000’s a year on maintenance meds.

Each side blames the other for the sky-rocketing prices.

The profit grabbing pharmaceutical companies blame insurance companies for passing along high costs to consumers but just like Pharma, Insurance is also a business. No-one works for free, everyone needs to have a profit. That’s why it’s so important for the US government to cap this nonsense and regulate prices. This would ensure that everyone makes profit without being greedy and regular people like us get to afford the medications they need.

There’s a problem here though and it’s just as big as the Pharma insurance war. It’s called politics. Both Insurance and Pharma companies know regulation is the solution to this problem but neither of them want it. It potentially means a loss of $millions profit for them each year. So, what happens? The drug companies and insurance companies pour a chunk of their profits into lobbying money to ensure that Washington doesn’t take a step in the regulation direction.

This is the biggest shame of all, for all 3 parties involved in the price war on drugs. The politicians are feeding this war which is having a detrimental effect on their constituents lives and bank account. The money being spent on lobbying could and should be taken out of the profit margin the company projections for the following year. Take that projected amount that you’re going to spend on lobbying and instead of working it into your profit margins, do us all a favor and take it off your profits, reduce your prices and make us all happy…. Apart from the Politicians who will lose their money. Your profit stays the same, patients get better drug prices…. What’s to lose?

We always make examples of crazy high priced drugs like those used to treat Hepatitis C or maintenance drugs like Januvia for Diabetes and Lipitor for High Cholesterol but we’re going to give you another horrifying example, one that affects millions of Americans. We’re going to show you what has happened to the price of EpiPens over the last 10 years and the unacceptable drug company profit that’s been taking place.

EpiPens are emergency injections that everyone with a severe allergy should carry around with them. It’s not an option not to have one. With the rise of childhood allergies and schooling regulations more and more people are arming their kids with EpiPens. There is a fast rising demand for them. If you have an anaphylaxis reaction you only have a matter of minutes to get to the hospital before the effect of the allergic reaction can become fatal. An EpiPen floods your body with adrenaline which gives you more time to get to the ER.

Since 2007 the price for a pack of EpiPens increased by 450%. In 2006 you could get a pack of 2 pens for around $100, now the same pack costs nearer $600, according to GoodRX. It’s insane. At IsraelPharm branded EpiPens cost only $176 for 2 pens and that’s including International shipping. A classic example of unacceptable and unjustified drug company profit.

This is not a new drug, no R&D has been spent on it in recent years, it was actually developed from taxpayers money. So why the price hike? Why the profit margin hike? According to a Bloomberg News report profit margins increased from 9% to 55% during the period 2008-2014 and no-one can justify why. It would appear that the drug companies jumped on a way to make easy profit: Target worried parents for a crazy price, a price you know they will pay as it’s for the safety of their children.

What’s your opinion on drug company profits and the drug company vs insurance company war? Have you got a solution on how to stop the price? Do you disagree with what we have said? Please share your views with us, the good and the bad. Charging high prices for new drugs is one thing, but taking an old drug that needs no new development and charging huge profits on it is not acceptable. Make a slightly high profit to cover some other company costs and fund different research but don’t hike it up so unreasonably.

We are Israeli and are very thankful that we have a government who regulates and caps the prices of drugs so we do not need to deal with this and feel that we have been taken advantage of every time we step in to the pharmacy and fill a prescription. Our subsidy basket is one of the best in the world. That’s one of the reasons why IsraelPharm.com was launched over a decade ago. So we could help people worldwide (but especially from USA) gain access to affordable medications. It’s sad that in 2016 it’s a luxury to afford medication. It’s even more ad that we feel taken advantage of every time we hand over the cash or credit card to pay for these medications. When you buy online from Israel you not only get your meds at great prices, you also send a message of resistance to the drug companies, insurances or politicians in the US who seemingly work hard to ensure that medications in the US remain high and largely unaffordable for the foreseeable future.