Taffix: An Israeli Nasal Spray that Defends Against COVID

Protect yourself from COVID-19 infection

Throughout the dramatic cycle of ups and downs that characterized the progress of the fight against COVID-19 since it broke out of China at the beginning of 2020, scientific developments in the Israeli “Start-up Nation” have been close to the leading edge.

The genius of Israeli science was brought fully into the field to find effective ways to combat the pernicious bug. One of the most promising moves was by a dynamic biochemistry startup company called Nasus Pharma, where a revolutionary new product called Taffix spray was invented. Now you can benefit from the company’s innovation and start to protect yourself from the pandemic.

About Nasus Pharma’s scientists and their scientific breakthrough

Nasus Pharma is an Israeli start-up that specializes in discovering new drug treatments for a variety of diseases, with the common theme of delivering the drug through the nasal cavities with a simple sniff. The idea behind this approach is that it promotes quick delivery of drugs to the bloodstream, at least as fast as intravenous or intramuscular injections. And it’s far less invasive, quicker to administer, and is easier for self-dosing, and repeat dosing, without medical attention.

While initially, the focus of their research was on finding a way to administer brain-targeted drugs, the sudden onset of the COVID-19 pandemic opened up a new field and they quickly designed and developed a completely new idea – using Nasus’s unique patented technology for administering a specialized thin gel over the nasal mucosa inside the nasal cavity. 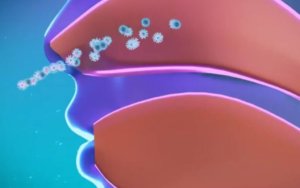 The resulting product, called Taffix, works directly on the lining of the nasal cavities, acting as a blocker to prevent viruses from infecting the cells underneath. In lab studies with Taffix, the spray was shown to be 99% percent effective in blocking viruses, including SARS-CoV-2, from infecting human cells

Trials and tests of Taffix

Nasus Pharma, together with three leading medical research facilities in Israel and the USA, conducted research and trials for Taffix from early in 2020, and the results were so successful that they immediately took the product over to Europe, where approval was given for public distribution.

Working with the School of Public Health at University of Haifa; the Department of Infectious Diseases and International Health at the University of Virginia, USA; and the Meuhedet HMO Research Institute at Hadassah Medical Center in Jerusalem; the company conducted a unique trial in September 2020.

A target group of 83 men in a highly contagious community were given Taffix to be used whenever they were in close contact with the general population. At the end of the two-week trial, the rate of infection with COVID-19 virus in the trial group was less than a quarter of that of the general infection rate in the community, with only two cases that had picked up the virus, and in both cases, they had not been properly dosing with Taffix. In comparison, more than ten people who weren’t part of the dosing group developed the infection in the same trial period.

What makes Taffix so special?

In the rush to find ways to combat the pandemic, the goal is for us all to achieve ‘herd immunity’ through vaccination. However, this approach is extremely expensive and in some cases out of the reach of poorer countries. It will also take several years before enough people have been vaccinated for us to get to herd immunity.

In the meantime, Taffix has immediate advantages over other protections. Taffix works specifically by coating inside your nose with a thin micro-gel that stops the virus from getting into your receptive cells – the breeding ground for the infection. 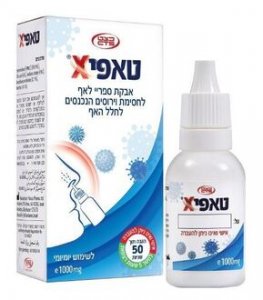 Most importantly, it works when you need it most. You are not at risk 24 hours a day. Most of the time, you are in a safe environment at home or at work, where you know others around you and whether they could be infected. The time when protection is needed most is when you are moving out into public space. Here, a single dose of Taffix will give a better level of protection than even the best vaccine developed so far. Taffix provides 5 hours of 99% protection from virus infection – not just COVID-19, but other viruses and bugs that cause infections and allergic reactions. That’s better than any vaccine can give.

Taffix is easy to administer with just a sniff, and it can be used up to three times per day – whenever the danger of infection with COVID-19 is elevated. It starts to work within a minute of the dosing, and the protection lasts as long as 5 hours.

How do I get hold of Taffix?

Taffix is available right now through our online website at IsraelPharm. It is an over-the-counter medication so it does not need your doctor’s prescription. It’s recommended for adults over the age of 16 and is safe with no dangerous interactions with other treatments or medications.

While you should still go ahead with all of the other protective measures recommended, take Taffix with you whenever you go out into a crowded or unfamiliar public place – it’s the best form of protection you can have. Don’t leave home without it! 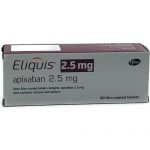 What is Eliquis? Why Take It?

Eliquis (generic name apixaban) is commonly used as an anticoagulant for the treatment of: Deep vein thrombosis  Pulmonary embolism blood 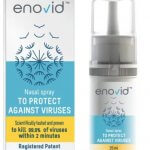 The battle against viruses and infections goes into overdrive this week, with the release of the long-awaited Israeli-invented nasal spray